How we approach death and the dying, how or whether we remember or care for the dead – these questions are inextricably bound up with how we age, or don’t, in the dominant culture of the West – and with the disappearance of elderhood as a skilled function in these times.

I have three cartons of Stephen Jenkinson’s new book in my office pending his appearance in Portland this Fall – but you don’t have to wait. The book is available through your local independent bookseller or the Orphan Wisdom School.

Here’s what early readers have to say:

“This isn’t a book, it’s a kind of divining, the rare breed that can leave the scriber harrowed and the reader blessed.”
—Dr. Martin Shaw, author of Scatterlings: Getting Claimed in the Age of Amnesia END_OF_DOCUMENT_TOKEN_TO_BE_REPLACED

They are nights in which love letters to life are written and read. There’s some boldness in them. They have that tone. These nights have the mark of our time upon them, and they’ve become timely, urgent, alert, steeped in mortal mystery, quixotic, with some swagger. What would you call such a thing?

Watch Staring Down Fate, an important new documentary about mortality and the state of our planet

When Chris Lucash was diagnosed with ALS at the age of 53, he and his wife Alisa and their three young children moved to a community where they and their neighbors could make a place for his dying and death.

A few years earlier, filmmaker Jeff Mittelstadt had begun documenting Chris’ life work. As a federal biologist, Chris had worked for nearly 30 years to reintroduce endangered red wolves into the wild. When he began, zero existed outside of captivity; under his program,  red wolf numbers in the wild rose to about 130 before the program was undercut by political controversy. During those years in the field, Chris was exposed to the toxins of industrial agriculture that may have caused the disease that would claim his life.

The day after his diagnosis, Chris and Alisa and Jeff began to make Staring Down Fate, a feature-length documentary that brings us into the intertwined stories of the endangered red wolf and Chris’ journey towards death.

END_OF_DOCUMENT_TOKEN_TO_BE_REPLACED

Is Dying “Not As Bad as You Think”?

What’s your take on the popular BBC “IMHO” video?

My first thought was that Dr Kathryn Mannix is a Mr Rogers for the dying: who wouldn’t want her warm and normalizing bedside manner at the deathbed?

I appreciate much of her message, and can’t help but be troubled by other parts of this reassuring video.  END_OF_DOCUMENT_TOKEN_TO_BE_REPLACED 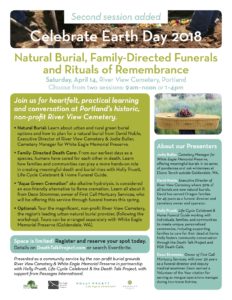 More than 100 people journeyed to River View, the historic nonprofit cemetery, on April 14th to hear about greener, more meaningful ways of caring for our dead. We received universally high ratings from participants, who had this to say about the event:

The best parts were having so many knowledgeable, articulate and experienced experts presenting in one seminar – and hearing their passion about returning death care to families and communities & the simultaneous heartache over how far removed American society has become from death and dying.