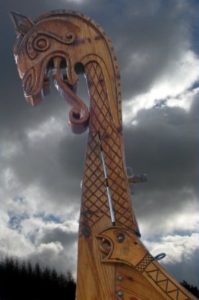 I often begin my discussions with community groups asking, “How many of you grew up going to funerals? How many have bathed the body of a loved one after death? Who has been present during a cremation? Lowered a body into a grave? Or helped to close a grave, with a shovel or handful of earth?”

Here in the highly secular Pacific Northwest, at the far edge of the continent where the majority of us whose people came from Europe have shed generation upon generation of custom and culture, very few hands rise in affirmation. Recently I accompanied a woman to a graveyard – the first she’d ever been to, in her more than five decades of life.

Lacking any direct connection to our ancestral funeral rites, it’s no wonder that so many in these times turn to “My Life. My Death. My Way.”  Death as what Stephen Jenkinson terms “a personal style event”. Even when we seek to learn from how it was before the modern funeral industry replaced the family and community in caring for our dead, we see through the lens of individualism and personal choice.

My email in-box brings frequent postings from those seeking to provide an alternative to outsourced death rites, my peers in this understandable crusade for a better day, a better death. And, so often, these postings speak the language of the same spell that separates us from what we seek.

A recently uncovered (or desecrated, depending on your perspective) 10th century Viking burial site is described by The British Museum as evidence that “almost every funeral was different, giving the deceased a personalised send-off”.

The advocate who shared the museum’s blog post took it one step further, writing: “What is perhaps the most striking fact of this story is that each viking burial was a truly personal event. Death was less about the group, and more about the individual.”

I know a woman who studies the ways our ancestors were buried, not for inspiration as to how she herself might go out in style, but to wonder about how the living might tend to the dead, and not just the recent dead. To glimpse how their deaths fed life, just as a seed, both daughter and mother to life, goes to ground.

It was she who first alerted me to the assumptions alive in the phrase “Rest In Peace” – as though the dead have no further work to do, put out to pasture for a nice long dirt nap. (And she who questioned, when shown this article, if we do want our ancestors to “Rest In Peace,” why would we dig up their graves?)

Might we wonder, she asked, if what’s seen in the Viking burial as evidence of “personal narrative” might instead be a way of being recognizable to those who died before them? Like the coins tossed into the grave to pay the ferryman for passage over the River Styx, might the grave goods be dedicated to maintaining the workings of the unseen world? Might the material wealth these ancestors wore on their bodies or carried through their days be returned to the earth as an offering to recognize where life comes from?

Might the meaning that those 10th century Vikings made through the manner of their burials be derived from what we would now call a belief in the greater good, in something larger than each individual, something beyond what we can see and study, a larger cycle of life and death, a natural order to be maintained by the manner of our dying, not defied by eternal expressions of our individuality?

As to how we might approach funeral rites not as personal style events, “less about the group, and more about the individual,” nor as “only for the living”, I often look to the prayer offered by Stephen Jenkinson, published in How It All Could Be: A work book for dying people and for those who love them:

I make a prayer now to your old ones, to those whose face you never saw and voice you never heard and name you haven’t known, that they remember you while you try to find them remembering you, that they come at the proper time to gather you in, that they whisper to you the truth that you haven’t been alone, and won’t be, that they know the hard friendship of the ending of days; I make a prayer that all who were there at your making will be there for your gathering in, that their hands will be there just by your opening head, your little fountain, to make a home for your sorrowing heart and for you; I make a prayer that your house and your people will be blessed by your coming and your going, that the day will come when they will boast for having for a while known you, and will marvel at the way of your going out from among them, and that you might be reason enough for them to continue for a while, and that in the days to come you will be claimed as noble, as an ancestor worth coming from.
~  Stephen Jenkinson

With thanks to the Orphan Wisdom School, and Stephen Jenkinson, author of Die Wise: A Manifesto for Sanity and Soul (I particularly recommend the audio version), now featured on a new audio recording, Nights of Grief and Mystery, with fellow troubadour Gregory Hoskins.