The primary reason for our decision to come to the end of our organizational life-cycle as PDX Death Café is that the labor required to manage a large number of volunteers, a wide diversity of venues (or the complexities of virtual environments), with high-attendance Cafés is hard to sustain over time – we are proud we did so for 7+ years!

Most Death Cafés around the world are organized by a single facilitator or a small team of facilitator-organizers and offered in smaller venues. Some have already been organized independently on that model in the Portland area, and we hope that the closing of PDX Death Café encourages more to pop up.

At a Death Café people drink tea, eat cake and discuss death. The aim is to increase awareness of death to help people make the most of their (finite) lives.

PDX Death Café is part of an international movement. Visit DeathCafe.com to learn more and search for a Death Café near you. 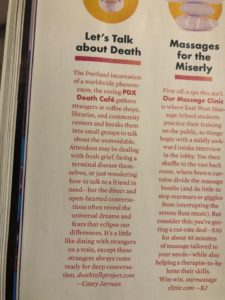 View Why I Talk About Death, a short film by Kate Brassington, the very first person to contact PDX Death Café about getting involved.

In early 2013, three colleagues met to explore a collaboration that would engage the community in talking about death. Life-Cycle Celebrant Holly Pruett, then in training as a Home Funeral Guide, had heard about a new conversational format that had just come to the US from England. Hospice Chaplain Don Tarbutton and Family Funeral Guide Nancy Ward were game to give it a try. Holly recruited the iconic Bijou Café as our first location. We put up a Facebook page and welcomed other volunteer facilitators. Next thing we knew, over 100 people were expressing interest in attending.

PDX Death Café has been acknowledged as the largest in the world, with over 2,400 people on the notification list. Local popularity of PDX Death Café led to the organization of a day-long event, Death:OK, the predecessor for the Death Talk Project.

In the three years from April 2013-May 2020, we organized 72 Death Cafés in locations including restaurants, libraries, hospice programs, community centers, college reunions, and even a music festival.  These Cafés were possible thanks to the volunteer efforts of our table facilitators and the generosity of our host locations.

Read the reports from our first year of Cafés, with detailed analysis from participant evaluations: