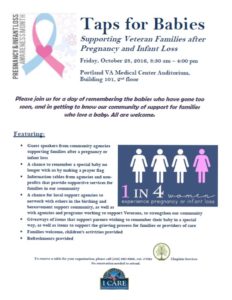 “The day my second daughter, Marina, was born, was the second happiest day of my life,” Tamara Wedin says. “But it was also the second most heartbreaking. She was beautiful and perfect and had the deepest blue eyes you’ve ever seen…ten perfect little piggy toes…but she was not breathing. She had died two days prior, which we were fortunate enough to watch on ultrasound as her last heartbeat showed on the monitor.”

Tamara has channeled her family’s agony – grief that came close to taking her down – into Taps for Babies, a support program for other veterans who’ve experienced pregnancy loss or the death of an infant.

One in four pregnancies ends in a loss, according to Tamara, and studies show that for veterans and military families, the risks are even higher. Taps for Babies, now in its second year, is determined to educate others about the very real need for support after a pregnancy loss or infant death, and to make sure veterans are connected to the very best support the community and VA system has to offer. The event, the first of its kind for veterans in the nation, brings together grieving families, non-profit organizations, and VA staff.

Tamara says, “If you would like to come and join us to remember your baby, explore supportive services for families who have lost a baby, or to educate yourself as to what this kind of loss looks like, and how you can support families who lose a baby, either in your community, or with your patients, please join us for this special day of speakers, non-profit groups and support.”

Currently working with the Orlando Veteran’s Administration on starting a program, Tamara quotes the saying, “There is no expiration on my oath of enlistment.” She says, “This program is ultimately about looking out for each other and leaving no one behind.”